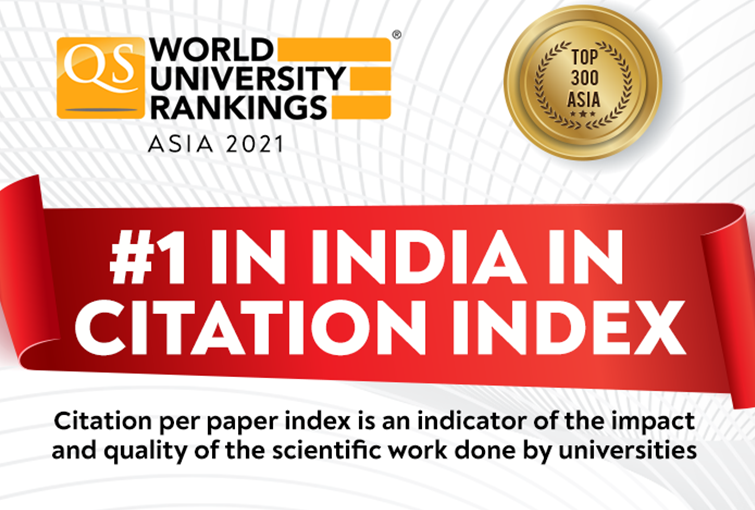 Eleven-year-old Shoolini University of Biotechnology and Management Sciences, based out of Solan district of Himachal Pradesh, has topped India in the 2021 QS rankings for citation index, an indicator of quality research in institutions.

Eleven-year-old Shoolini University of Biotechnology and Management Sciences, based out of Solan district of Himachal Pradesh, has topped India in the 2021 QS rankings for citation index, an indicator of quality research in institutions.

It has been ranked at number 14 across Asia in the same field.

Quacquarelli Symonds (QS) is an independent and highly prestigious credible global ranking organisation for educational institutions and its Asia rankings were declared on Wednesday night at an online function.

Shoolini University, the youngest to be among top ranked, has been ranked joint seventh among all private universities in the country and 38th all universities and educational institutions. This includes better performance than most IITs, Panjab University and several other established institutions. It is the only institution in Himachal Pradesh to be ranked in the list.

The QS Asia rankings also placed Shoolini University among the top 300 Universities of Asia. Significantly, it is for the first time that the University has been included in the QS rankings. It has debuted in the 2021 edition with percentile evolution of 43.4 per cent.

The young, Trust-run university, which has been making waves in the field of research and innovation, was recently placed third in the Education Ministry’s list for filing patents in the country which was topped by the combined output of all the 23 IITs of the country.

Vice Chancellor Prof P K Khosla said the QS rankings the University has earned reflected the sincerity and hard work of the researchers at the University. He said the University was poised to reach greater heights and added that its mission was to be among the top global universities.

The achievement is all the more significant in view of the fact that the ranking is among over 1,000 institutions, including IITs, IIMs and central research institutes and Indian Institute of Science Education and Research, in India. Another highlight of the report is that the University has figured among the top 44 per cent of the QS World University Rankings.

The University, located at Bajhol village in Solan district of Himachal Pradesh, has been retaining its place in the 101-150 band of the National Institutional Rankings Framework (NIRF) by the government of India’s education ministry for the last four years in a row.

The young University has so far filed nearly 450 patents and at least seven of its faculty members were recently placed among top two per cent of scientists of the world as per a study done by the Stanford University.

It was recently placed in the band from six to 25 in the Atal Rankings of private Institutions on Innovations and Achievements (ARIIA) at the all-India level recently.

The University had also got the prestigious QS international certification for excellence in Academic digitalisation and was shortlisted for Times Higher Education (THE) in the category of “Outstanding Student Support” for the Asia Awards 2020.

Citations per paper is measured by the average number of citations obtained per publication, and is a proxy of the impact and 10 per cent quality of the scientific work done by the universities. Underlying data of paper and citations is indexed by Scopus.

The paper and citations counts are normalised in an attempt to equalise the influence of citations across five broad faculty areas.

Earlier, Shoolini University was among only 35 of the one lakh institutions, including over 900 universities, across the country to be awarded certification for Excellence in Academic Digitisation.

It was also shortlisted for the category of “Outstanding Support for Students” for the implementation of its Skill Progression Through Rapid Intensive and Innovative Training (SPRINT) Programme with SIQANDAR.AI, a software developed for assessing and guiding students for soft skills and interviews.