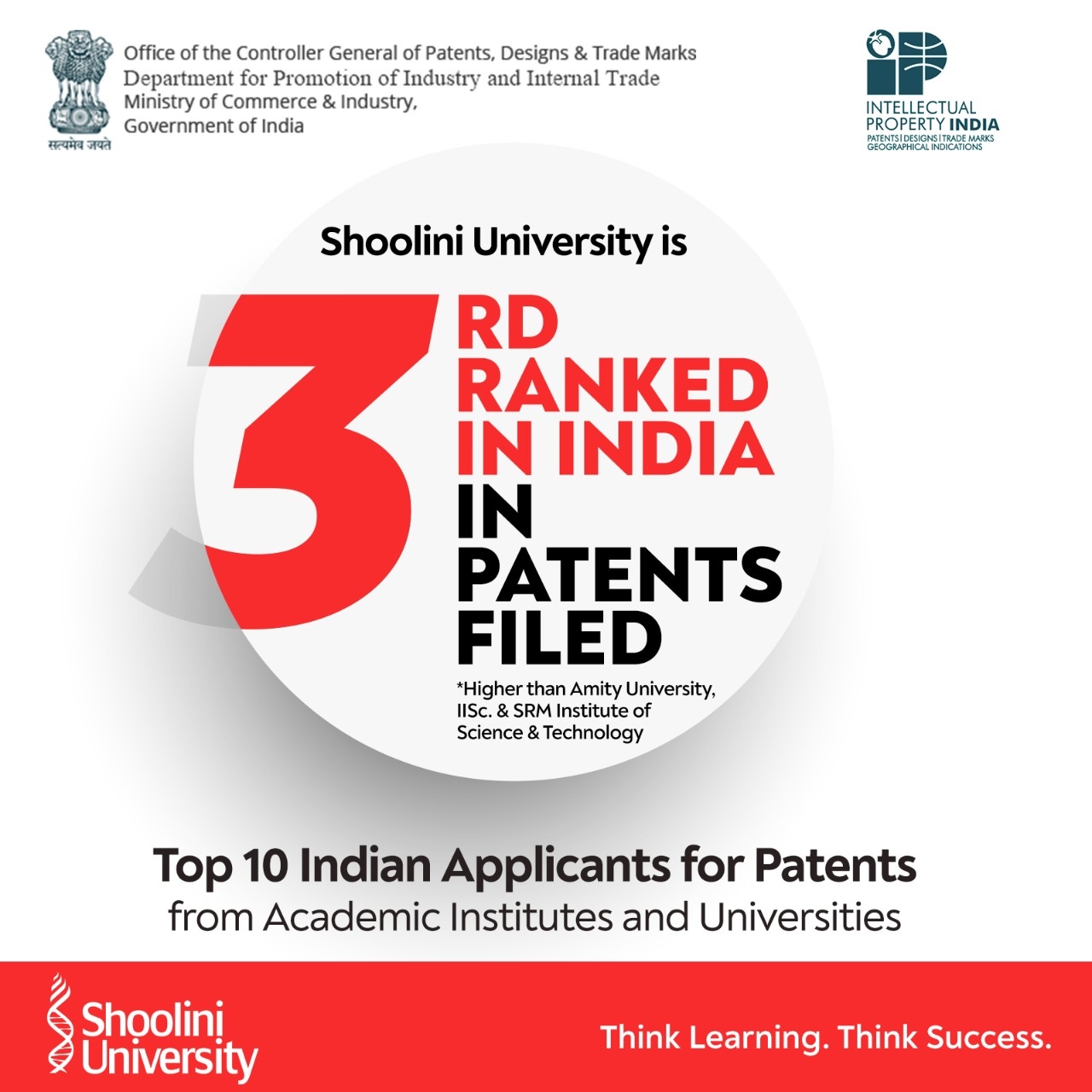 It’s a big achievement at only 10 years of age! Yes, Shoolini University now ranks third in the country, and first in Himachal Pradesh, in filing patents by academic institutes and universities across India.

It’s a big achievement at only 10 years of age! Yes, Shoolini University now ranks third in the country, and first in Himachal Pradesh, in filing patents by academic institutes and universities across India.

The Office of the Controller General of Patents, Designs, Trade Marks and Geographical Indicators declared the rankings on Thursday. This office falls under the Union ministry of Commerce and Industry’s Department of Promotion of Industry and Internal Trade.

According to the annual report recently released by the Office of Intellectual Rights, India, the Indian Institutes of Technology (IITs) are first in the list of patent filers. However, the patents filed by all the 23 IITs in the country have been merged to declare the group of institutions as the top patent filer.

While the report did not reveal the exact number of patents filed by every institution, it mentioned the number of patents filed from each state. As per the report, a total of 193 patents were filed from Himachal Pradesh in the period April 2018-March 2019, and Shoolini University alone has the record of filing 185 of these patents during this time. There are a number of institutions, including centrally funded institutions in Himachal Pradesh, but almost all patents have been filed by the researchers at Shoolini University, taking the state to be among the top patent filing states of the country.

Since its inception 10 years ago, Shoolini University has filed 425 patents.

Vice Chancellor Prof PK Khosla congratulated the faculty and students for the prestigious rankings. He said the rankings reflected the emphasis laid on research in the university. The university, he said, was already rubbing shoulders with the world’s top universities in various parameters of research and innovation.

Prof Khosla said it was in late 2014 that the university started focusing on research and only 33 patents were filed in the first year. However, the researchers soon picked up pace and the number of patents filed stand at 425 now. The next step after the formal filing of patents is the publication, and so far, 211 of these patents have been published.

Talking about the challenges posed by COVID-19, the Vice Chancellor said the pandemic had slowed down the research work, but everyone was making the best efforts in the present scenario to expedite pending projects.

Shoolini University has filed the maximum number of patents in Biotechnology, followed by those in Engineering, Basic Sciences and Pharmaceuticals.